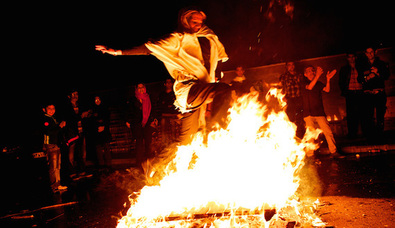 Chaharshanbe Suri  - red or fiery Wednesday - festival in Iran.  Chaharshanbe Suri is on the eve of the last Wednesday before Nowruz, the Iranian new year, in March. People build bonfires in alleys and on street corners. They leap over the flames, calling on the fire for good health and good fortune:

Sorkhi-e to az man - Give me your beautiful red color
Zardi-e man az to - And take back my sickly pallor!

Chaharshanbe Suri reaches back to the ancient, pre-Islamic culture of Iran. The Encyclopaedia Iranica says it derives from the Zoroastrian festival of Hamaspathmaedaya to honor the souls of the departed, and no doubt reaches even further back to the widespread reverence of fire among Indo-European peoples, from the Vesta of the Romans to the Agni of the Indians.

Thirteen centuries have passed since the Muslim conquest of Iran, five centuries since the imposition of Shia Islam by the Safavids, and near four decades since the Islamic Revolution of Ayatollah Khomeini. Islam is a universalistic ideology, like communism in the past, and big business globalism today, and as hostile to national identity as any. And yet, despite the recurring disapproval of the Islamic authorities over the long centuries, Iranians still hold fast to and revel in their ancient national culture. What an astonishing, enthralling fact this is!

They are not Zoroastrians any more, for the most part, it is true, and yet it is also not to the god of Islam that these Iranians are calling to ‘Give me your beautiful red color!’

‘A quiet political war between the clerics and the public’

A piece in Al-Monitor from 2015 reports on the cat-and-mouse contest over Chaharshanbe Suri between the Islamic authorities, who issue prohibitions and strong warnings against marking the festival, and the people, who defiantly set off firecrackers and light bonfires.

“Kourosh Zaeim, spokesman of the old opposition party Iran National Front, told Al-Monitor that prohibition of Chaharshanbe Suri is an outcome of a general trend that opposes national ceremonies. ‘From the beginning, the Islamic Republic opposed and prohibited all Iranian ceremonies and rituals,’ Zaeim said. ‘They even opposed Nowruz and tried to replace it with Eid al-Fitr (Muslims' religious feast at the end of Ramadan).’…

“ Ali Akbar Mahdi, a sociology professor at California State University, Northridge, explained to Al-Monitor that extremist Muslims oppose Chaharshanbe Suri ‘on an ideological ground, this tradition belongs to Zoroastrian religion — a religion which was challenged by Islam in the seventh century. The Islamic Republic has declared Iran an 'Islamic country,' emphasizing its post-Zoroastrian history and Shiite identity.’

" Mahdi argues that Chaharshanbe Suri is a ‘quiet political war between the clerics and the public: the more clerics reject the Iranian pre-Islamic traditions, the more Iranian public resort to their revival as a form of resistance. That is why you see an intensification of this practice as the Islamic Republic has progressed.’ "

The brief but widespread and explosive anti-regime uprising across Iran in January showed that anti-regime opposition is taking on the character of national resistance to an anti-national clerical regime in all its forms – ‘moderates,’ ‘reformers,’ ‘hard-liners,’ the whole lot.

The uprising was sparked by rising economic hardship, driven by inflation, unemployment, falling living standards, and the looting of middle-class savings by fraudulent banks controlled by regime insiders. The crowds were quick to find the causes for their hardship in permanent features of the Islamic regime itself – its vast military expenditures to help spread the revolutionary Shi’ite ideology in other countries, for example, or the unbridled greed, corruption and unshakeable self-entitlement of the clerics and their offspring.

No longer using the rights-based lexicon of votes and recounts, Iranians are instead demanding national dignity from a regime that for too long has subjugated Iranian-ness to its Shiite, revolutionary mission.

It’s notable, for example, that protestors chant “We Will Die to Get Iran Back,” “Not Gaza, Not Lebanon, My Life Only for Iran,” and “Let Syria Be, Do Something for Me.” Put another way: The people are tired of paying the price for the regime’s efforts to remake the region in its own image and challenge U.S. “hegemony.” Some have even taken to chanting “Reza Shah, Bless Your Soul,” expressing gratitude and nostalgia for the Pahlavi era, which saw the modern, pro-Western nation-state of Iran emerge from the shambles of the Persian Empire.

But much of the energy seems to be directed against the regime itself, and particularly against its hardline elements. The loudest slogan from crowds I watched on a rally livestreamed from a city in Western Iran was “marg bar Khamenei”—“Death to Khamenei.” That’s a twist on the famous “Death to America. Similarly, protesters in one video could be heard shouting “esteghlal, azadi, jomhouri Irani”—“Independence, Freedom, Iranian Republic,” an anti-regime adjustment of the 1979 revolution’s “Independence, Freedom, Islamic Republic.” That same video featured a darker slogan: “We are Iranian, we don’t worship Arabs”—a dig at the Islamic Republic’s elevation of an Arab-origin religion, sure, but also a reminder of the chauvinist streak in Iranian nationalism.

Speaking of the aghazadeh (“noble born”), the sons and daughters of the clerical rulers. Edward Luttwak says:

The Supreme Leader Khamenei himself is not known to have personally stolen anything—he has his official palaces, after all. But his second son, Mojtaba, may have taken as much as $2 billion from the till, while his third son, Massoud, is making do with a mere 400- or 500-hundred million. His youngest son, Maitham, is not living in poverty either, with a couple of hundred million. The ayatollah’s two daughters, Bushra and Huda, each received de-facto dowries in the $100 million range….

That is one motive for today’s riots—bitter anger provoked by the regime’s impoverishing and very visible corruption, which extends far, far beyond the children of the top rulers: thousands of clerics are very affluent, starting with their flapping Loro Piana “Tasmania” robes—that’s 3,000 euros of fancy cloth right there.

Much of the economy is owned by bonyads, Islamic foundations that pay modest pensions to war widows and such, and very large amounts to those who run them, mostly clerics and their kin. The largest, the Mostazafan Bonyad, with more than 200,000 employees in some 350 separate companies in everything from farming to tourism, is a very generous employer for its crowds of clerical managers.

This inclination of the Shia clerics to use state power for personal enrichment is not new either.  Shia Islam became the state religion of Iran with the rise of the Safavid dynasty in 1500.  “This was a militant Shiah government,” says Ray Mottahedeh in The Mantle of the Prophet. Religion and Politics in Iran. “The Safavis not only coerced their subjects but allotted a vast proportion of their revenues for support of mullahs and madresehs.  Men such as the lachrymose sayyed Nematollah struggled for recognition within the religious establishment because the rewards were enormous.”